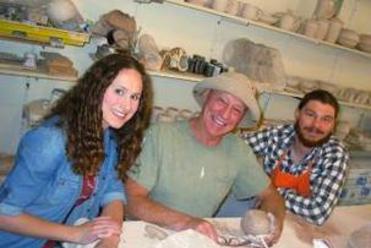 While anyone is capable of making great art, only a few take on the artistic journey. Artists, for me, are sacred and extremely brave. Their work is not always an easy path, nor is it always consumer ready.

I have known Means since she was a teenager. She has taken ceramics classes at Western Colorado Center for the Arts (WCCA) in Grand Junction for years. Means, now 21 years old, has always loved the aesthetic of the Middle East, and she has studied Middle Eastern forms in architecture, Egyptian belly dance and henna body paintings. All three show up in her clay work. Currently Means works beyond the classroom in two other art studios in Grand Junction — the ceramic studio of Clifton artist Damian Radice and the clay studios of WCCA.

Radice also rents a space to a 28-year-old Austin, Texas native named Matt Jones. Jones has come to appreciate Chinese culture through the practice of Karate and Kung Fu.

Means and Jones, both Colorado Mesa University students, are now a creative couple. And both are studying the ideas of far-off lands — not just because of aesthetics, but also for the philosophical elements that translate into visual language in mark and in form.

We are all influenced by other cultures or even our own. New Yorker Andy Warhol was diving into mass production and consumer culture because his father was a factory worker in Pittsburgh. Warhol later named his studio “The Factory” and called himself an “Authentic Fake,” an unapologetically manufactured persona. He was immersed in pop culture and built a whole body of ever-changing work throughout his lifetime. His world of immersion is absolutely opposite in look to Radice’s peaceful studio paradise. But it is no lesser path.

It is amazing how we discover our paths and our influences so early. When we are influenced, we try to honor and master these traditions, move through them and build our own ideas. That is the risk and challenge that always brings us on this roller coaster of an up-and-down creative process.

I love to see immersive artistic environments; they are unique and utterly transformative. Jones and Means have this opportunity to live a forever-changing creative life. I envy them a bit, to be so focused and expansive.

Free Press columnist Camille Silverman holds a Masters of Fine Art from Cranbrook Art Academy located outside of Detroit, Mich. She attended Cranbrook as well as The School of the Chicago Art Institute. Silverman currently holds the position of curator and executive director at The Western Colorado Center for the Arts, aka The Art Center. The word “Stalk” is important because implies relentless pursuit, but also implies the idea of growth, as in “Jack and the beanstalk.”

In the film “Easy Rider,” George Hanson
(played by Jack Nicholson) proclaims that
everyone says they want freedom, but when
they see it — really see it — “It scares them
to death.” I personally see this freedom to
explore in two up-and-coming Grand
Valley artists — Ashtonn Means and Matt Jones. 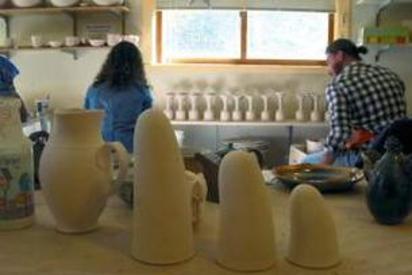 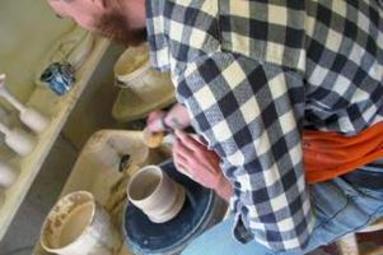 According to Jones, he decided to rent from Radice because he loves the Grand Valley area, as well as the whole artistic vision and layout of the property. It includes a clay studio, the cottage he rents that is located alongside a bronze foundry, and a fence made of different-styled doors all in a row (creating a separation from the outside world). As you walk past the main house into the backyard, a visitor may think he or she has entered an arts colony far away from the hustle and bustle of the real world.